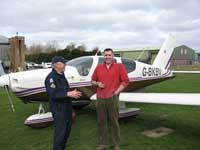 The FAA Squadron was formed in 1996 and currently has over 90 members and 62 aircraft ranging from sophisticated twins, a Jet Provost and a Hunter to Microlights such as the Shadow.?

The Squadron is run by a team structured along Naval Air Squadron lines:

Each person is appointed at the AGM in November for two years and thereafter may seek further appointment. ?They may resign on giving notice to the CO.? The Squadron Team have authority to co-opt any full or associate member to fill a vacancy until the next AGM.